Now, where was I?  Ah, yes, thinking I would entertain you and myself with some photos of our recent happenings.


The garden bounty on Friday included some rhubarb – and I didn’t feel like pie (GASP!), so I made apple/pear and rhubarb jam instead. 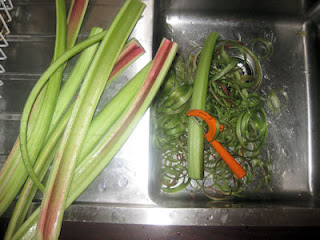 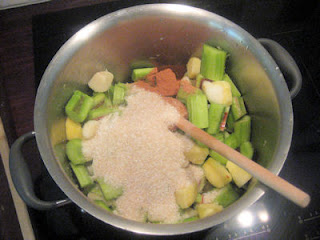 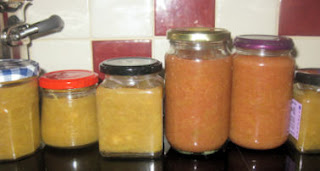 You could see that our rhurbarb is very green instead of red?  Anyone know why?  Anyway, I realised that would make quite a green jam – which I am fine with – but as I was researching recipes on the ‘net, one mentioned adding red food colouring – so since I had some natural pink food colouring in the cupboard, I thought I would do a couple of jars – because I am thinking the kids will find that more ‘palatable’.  You can tell which ones, can’t you?


Oh, and maybe I can redeem myself for adding food colouring by saying that those 2 cups of sugar you see in the pot are actually a raw sugar/stevia mix – to ‘healthy it up a little bit’ ;-).
Posted by Sunny Strawbaler at 05:00

Email ThisBlogThis!Share to TwitterShare to FacebookShare to Pinterest
Labels: rhurbarb

Sunny Strawbaler
We're building a house - strawbale style - it's bound to be an adventure!